Join 131 other subscribers
Follow The Open Road Ahead on WordPress.com

But the Colorado rocky mountain high
I’ve seen it rainin’ fire in the sky
The shadow from the starlight is softer than a lullabye
Rocky mountain high… Colorado.
-Rocky Mountain High, John Denver

In May of 1805, American explorers Meriwether Lewis and William Clark encountered the Rocky Mountains for the first time. Despite being home to numerous Native American peoples for thousands of years, the mountain range remained largely unexplored by Europeans and Americans until President Thomas Jefferson commissioned the Lewis and Clark Expedition and directed them to map out the territory newly acquired by the Louisiana Purchase. It took the expedition over three months to cross this uncharted mountain range. Running for more than 3,000 miles, from Canada to New Mexico, the mountains are home to flora and fauna, countless animal species, and precious minerals. Beginning in the 1850s, deposits of  gold were found in the foothills of the mountains, driving the establishment of towns such as Denver and Boulder. These settlements which would eventually lead to the founding of the state of Colorado.

My wife and I flew to Denver to attend the wedding of our friends, and no sooner had we departed from the airplane then we were stunned by the gorgeous landscape that appeared before us. We quickly made plans to maximize our three days in Denver by exploring the landscapes of Colorado in Rocky Mountain National Park.

Before I begin the latest travelogue, however, I wanted to take a moment to share a shorter adventure from closer to home:

And now, without further adieu… our newest adventure: 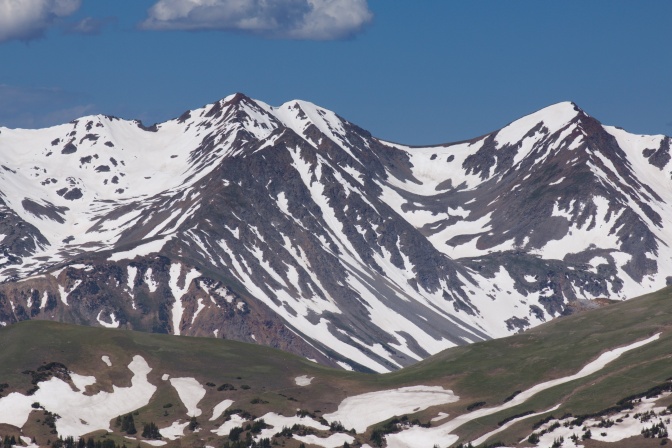 On the plane ride back to New Jersey, my wife and I began discussing where Rocky Mountain National Park ranked in the list of road trips we have taken. The answer, unsurprisingly, is right at the top as one of the best. Rocky Mountain National Park is open 24 hours a day, 365 days a year (weather permitting). Admission is charged either per person (for hikers and cyclists) or per vehicle if you’re taking a car or truck through the park. A one-day vehicle price is $25, a one-day single person pass (hiker or cyclist) is $15, although longer duration passes are available.

At this point of the blog, I would usually say something like, “If you’re in Colorado, make sure you stop by Rocky Mountain National Park.” Except that’s incorrect. If you have not yet been to Rocky Mountain National Park, make plans to visit. Make it the reason to go to Colorado, instead of something to do once you’re already there. This magnificent national treasure should be the purpose of a trip.

Thank you for coming along on another journey down the open road ahead.